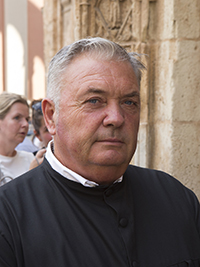 Syndic of the Acequia Mestalla

From the bank of the River Turia izquiera , ditch Mestalla , with its three arms : Petra, Escarmada Rambla , Rambla Rams and Algirós traditionally supplied a number of mills. Some of them documented in the time of James I, the most important of the orchards of Valencia , now disappeared entirely by the growth of the city .

Waters, historically, more immediate to the city of Valencia, extending its scope of supply to the seashore in the slums of Grau, Cabanyal and Malvarrosa . It is possible that this ditch is the sum of other independent former drains, currently being the most affected by the growth of the city .

His dam , upstream of the weir Rascanya , is among the terms of Manises and Paterna.La ditch - mother with her 14 files and four arms, approaches the city of Campana orchard .

The first branch of the canal 's is called arm Petra, just past the cemetery Cam Panar , it came to the city in the vicinity of the hospital Arnau de Vilanova Street Safor , you will find the street Dr . Nicasio Benlloch and, avenue General Avilés , crossing John XXII, seeks the path of Moncada where, with his llengues , is divided into two branches : one that goes to the Poble Nou and Carpesa and another , called San Jeronimo , is internal in the neighborhood of Torrefiel .

Another arm alongside the new Mestalla and , crossing avenues Campanar General Avilés and goes into the neighborhood Tendetes .

The mother of Mestalla, ditch across the avenue Valencian Parliament , takes us through the neighborhood Tendetes approaching the river and the suburb of San Antonio or neighborhood Vedre Mor, crosses the land of Valencia Station and across the street Alboraya is subdivided and is where the arms and Rams Escamarda born . The first, follow by the Carmelite convent at Genaro Lahuerta , where he again divided into the arms of Alegret and les files ( Fonda and Ampla ) watering , with the main Escamarda , areas Benimaclet road Vera and all area comprising the Polytechnic University. The arm Rams , goes to the Jardines del Real and Avenida Blasco Ibáñez and, following the line of the street Graphic Arts shall be divided into the arm Arquet that cross Blasco Ibáñez Avenue Catalonia toward the Malvarrosa , while the Rams continues to arm the Mestalla stadium , Aragon avenue crosses and enters the San José to go finally to Sawmill boulevard.

Algirós arm is separated from the Mestalla ditch up to Burjassot Avenue, approaching the left bank of the river, crossing the Royal Gardens and surrounding Monforte Gardens, penetrates Dr. Moliner Street in of Masco Sir, in the southern part of Mestalla stadium, branches into different arms: ullal de Sales and arms Algirós, Rock, Gas ditch, mill Sources and Carmona. All within the area bounded by the neighborhoods of Garden City, Albors, Ayora, Cami Fund, the Creu del Grau and Peñarroja. Few architectural elements are the hydraulic system of the ancient ditch: the seventeenth century weir with ruffs, Beacons and gates, among reeds of the river, some languages ​​and a few mills (four of the 23 who had at the begin ning of the twentieth century)