The Court of Waters of the fertile valley of Valencia is the oldest existing institution of justice in Europe. Although some legal institution that solved the water problems of the territories of Valencia would already exist from Roman times, the organization which we have inherited dates from times of the Al-Andalus and, very possibly, from times of the Califato (Caliph rulers) of Córdoba, perfected from the first moments of the conquest of the Kingdom of Valencia by the king Don Jaime.

It is a model of justice, well-known by all the ideologies, cultures and countries that form the rich Valencian personality, which has resisted the passing of time; neither the autonomous Valencia, nor the Bourbon centralism, nor the Cortes of Cádiz of 1812, detract jurisdiction of this court, which the Spanish Constitution of 1978, our Statute of Autonomy and other international organisms appreciate.

The water shortage for the irrigation in the fertile valley of Valencia, admiration of travellers who throughout centuries happened through this Valencian earth:,“...la huerta espessa e grand”, of the Poema del Mio Cid; el “...campo valenciano fertilísimo, pues produce inmensa variedad de frutos...”, of J. Münzer; la “...llanura deliciosa, en una región muy fértil y caliente...”, de Claude de Bronseval; “el más bello jardín del mundo”, of Cardinal de Retz; “la naturaleza parece haber repartido allí sus dones a manos llenas”, of A. Ponz; … highlights the kindness of the fertile region of Valencia and the necessity of a wise, equitable and right distribution of the water that was to arrive at 17,000 Has. of irrigated land through a complex system of mother drains, with its arms and hijuelas, “sequiols” and “sequiolets” that took the water from the Turia river. The concept of “row”, which is not a fixed volume of water but variable and based on the total volume of the river, was born from there (etymologically a part removed from everything).

There are eight mother drains that take water from the Turia river through their waterwheels; on the right margin, those of Quart, Benácher and Faitanar, Mislata-Chirivella, Favara and Rovella; on the left margin, those of Tormos, Mestalla and Rascaña. They are the ones in charge of getting from the river the corresponding part of the 138 rows in which the water of the existing volume in the place is distributed and where the first of the drains starts, the one of Quart;  that way, the water will arrive till the last one and will fertilize the corresponding fields without being harmed because of its situation. Today, the modifications caused by the construction of the new channel of the Turia river with the Solución Sur have made the system of waterwheels vary with the appearance of the Azud del Repartiment (`Cassola') from which the Acequias of Rascanya, Robella and Favara, take water, besides the Acequia del Oro.

Besides, the organization of the irrigations needs an institution that takes care of the administration of the water and the observance of the regulations provided with the wisdom and experience of the man of the fertile region of Valencia.

The Communities of the drains are subject to old Decrees, passed on verbally from Arab times and written since the beginning of the 18th century. An Administration Committee, chosen democratically among all the members of the Community, like the síndico-presidente (receiver-president) of the same, ensure the strict fulfilment of the regulations. All of them must be farmers, direct growers of their territories and with well-known fame of “honest men”. Receiver and vowels are helped in their work by the Guard of the drain, employee that makes sure the water arrives at all its turns and turns from irrigation, communicating the committed infractions so that these are denounced and judged in the Court of Waters.

The Court of Waters is formed by the receivers of the eight drains, presided by a receiver-president chosen among them. (There was a time in which they were seven until the Acequia de Benager-Faitanar was broken off the one of Quart and happened to eight the number of receivers. Today, the Acequia de Chirivella, arm that starts from the Acequia de Mislata, forms separate community, although its origin does not start in the same river).

However, it would be interesting to pay attention to a series of details that explain its perfect operation and the reason for its survival throughout time. First of all, the Court does not only have authority on a drain, but on the set of the same; secondly, its receivers have been chosen democratically among the member irrigators of their respective community; that is to say, it is not a superior authority the one that the judges impose, but the bases those that choose the judge to judge them, the reason why the most honest and right members in fulfilling this are always looked for. Finally, and as  V. Giner Boira highlights, its members are not people expert on the subject of law, then, although it is certain that they are not people of legal formation, they are not unaware of the law that has to be applied, based on decrees they dominate perfectly and that constitute the legal corpus by which each one of the Communities of Acequias (its turns of irrigation, the obligations of the cleaning of channels and drains, payment of contributions for general expenses of the Community,…)is in force. All this explains its moral authority, its survival and the respect people have to its sentences, always accepted till the point that it has never been necessary to go to the ordinary jurisdiction for the fulfilment of the same. Even, the case has occurred of some member receiver of the same being denounced before the Court, and this one, with the greatest natural manner, has taken his traditional black smock off, worn with great dignity, as if it were the gown of a magistrate, and has been placed in the place of the defendant to wait for the deliberation and sentences and, immediately afterwards, has returned to his place in the Court to continue with the agenda.

Students of  law of all  latitudes have found in our Institution the model of legal operation that has made it present in whichever subjects related to the water have been treated in different forums and international associations: “Water of Peace” (Washington, 1967); creation of the “International Association for Water Law”, March  1968; “Conferencia Internacional sobre los Sistemas de Derecho de Aguas en el Mundo”; approval of which we could call “Carta Magna del Agua en el mundo” (Mar del Plata, Argentina-1977); and, more recently, the congress “La gestión del agua en el siglo XXI”, celebrated in the Lonja of Valencia, December 1997, within the multiple activities of the foundation Valencia III Milenio.

The Valencian people have in high esteem what we can describe, without any doubt, as the most Valencian of the institutions. In that weekly appointment to which   citizens, judges, denounced, denouncers; but, also ministers, governors, cardinals, princes and kings, to whom high honour is granted to preside and to attend the sessions of the Court of the Waters, concur, we have one more of those multiple facets that the people have known to safeguard throughout the centuries as integral part of the rich, varied and unquestionable Valencian personality. 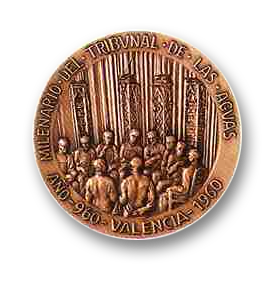