It is extremely simple. The denounced person is mentioned by the Guard of the drain for the following Thursday. Until twice he is mentioned and, if he does not attend the third appointment, after admitting the denunciation, he is judged in revolt being able to be condemned. It has never been necessary to go to the public force to make him appear.

The receivers sit in the armchairs assigned to each of their respective drains. The Alguacil (Bailiff) of the Court also attends the sessions. He was long ago major guard or true “atandador”, in charge of giving the water and raising the floodgates or shutdowns, carrier like standard of an improper golden brass harpoon, of two prongs, one of them bent, which was the instrument whereupon they separated and picked up the tables of the grooves of the partidores. The Bailiff, asks for consent of the President to initiate summons and calls publicly: “Denunciants de la Séquia de Quart”, and the denounced ones go, if there are any, accompanied by the Guard of the Acequia. The summons are done in the order in which the drains take the water from the river, beginning by the one of Quart, which is first, and finishing by the one of Robella, which is the last one. 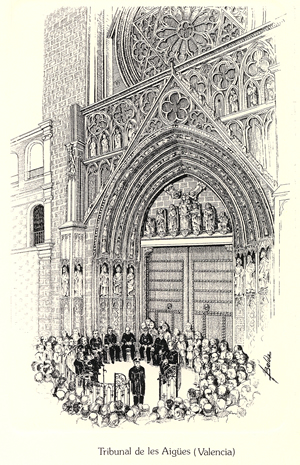 The Guard sets out the case or presents the plaintiff, if there is private prosecutor. It ends with the ritual phrase: “Es quant tenia que dir”(This is what I had to say). The President inquires: “qué té que dir l'acusat? ”(What does the defendant have to say?), and the defendant happens to defend himself. The famous “calle vosté i parle vosté”(you stop talking and you start talking) is not used any more, as well as that old custom, of Arab tradition, of indicating with the foot the person that was called upon to speak. The proceedings are totally verbal. The development of the judgment is totally in Valencian language. All take part in their own name, neither lawyers nor written documents; witnesses can be proposed and even ocular inspection (`visura'). The President and members of the Court can ask the necessary questions for better information on the case and, without more proceeding and in the presence of the interested ones, the Court deliberates and sentences.
In order to guarantee the impartiality, the Receiver of the drain to which the litigants belong does not take part in the deliberation; and, it is also norm that if the denounced one belongs to a drain from the right of the river, the receivers of the drains from the left propose the sentence, or vice versa. If the sentence is condemnatory, the President says the ritual phrase: “Este Tribunal li condena a pena i costes, danys i perjuins, en arreglo a Ordenances”(This Court condemns to penalty and costs, damages according to the Decrees). The Decrees of the respective drains establish the penalties for the different infractions. And resources nor appeals fit, as the sentence is executive; the Receiver of the drain is in charge of it. The Court only recognizes and sentences if the denounced one is guilty or innocent.

In this simple way, so effective and respected by all the members of an agricultural community, the laborious Valencian people have solved their water problems from the most remote times. There are no lawyers, there are no documents, no long bureaucratic proceedings that delay what constitutes the most elementary of the human rights: justice.

As far as the denunciations are concerned, they are mainly about: water theft in days of shortage, rupture of channels or walls, `sorregar' throwing water in neighbouring fields that damage the harvest by excess of this one, altering the irrigation turns taking the water the day that does not come, having dirty drains preventing the water from circulating with regularity, raising `parada' when an irrigator is using his turn, watering without turn request...

The employees of the drains can, also, be judged,  by their condition of irrigators as by their action before other Communities of irrigators, even the own receivers, as it has already been commented. The jurisdiction is also extended to people out of the communities of irrigators that have caused some damage to the system of irrigations, then, with their acts, they have entered by own decision the sphere of competitions of the Court. In case of nonappearance, it is also possible to condemn them, and it is possible to follow the ordinary route presenting the corresponding civil demand by the caused damages, adducing together with the evidence the condemnatory sentence of the Court of Waters. 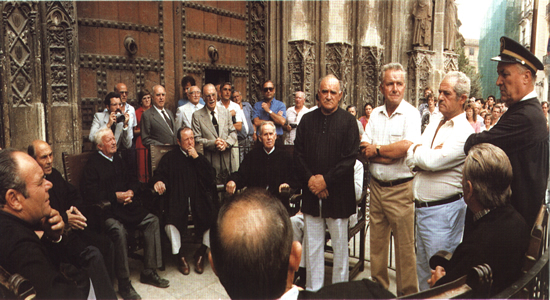 The proceedings of the judgment, as it has already been said, are totally verbal. However, after the first Ley de Aguas (Water law), the necessity of having a certain record, led to a Libro de Registro (Registration Book) in which some data of each judgment such as the denounced one, drains, reason for denunciation and date appear.

The Court has one double function: judicial and administrative. According to the customs and traditions, the name of Court of the Acequieros of the fertile valley of Valencia is used to talk about these two functions, whereas the name of Court of Waters is reserved for the judicial functions themselves. In fact they are two different organisms but those act the same day, place and hour, and integrated by the same people (the receiver is, simultaneously, jury and acequiero) or with a slight variation (the Acequia de Robella has a receiver-jury and a receiver-acequiero). When they finish judging the denounced cases within the framework of the Door of the Apostles, the receivers happen to the neighbouring Casa Vestuario to treat the common subjects; in this case there are nine receivers since the representative of Chirivella joins them. 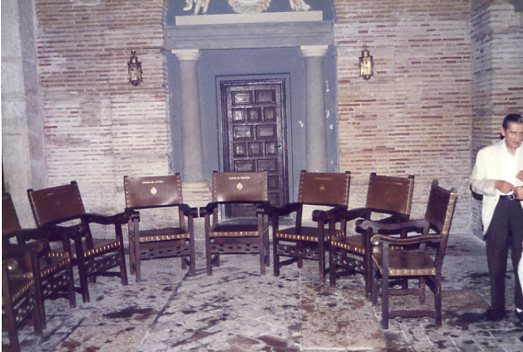 The fundamental problem to deal with is the situation of the water of the river; it is decided to open the winches of the drains more or less according to the volume  and to solicit, where appropriate, turning to old privileges granted by king Jaime II, in 1321, water from the Acequia de Moncada (the old Acequia Real or de Puzol). In this administrative aspect, the Court is subject to the Comisario de Aguas (Water Commissioner), as a superior organization, the person in charge of solving the questions raised between the Court of Waters and the Acequiero mayor of Moncada. At the moment, the main subject of the meetings is related to the exit of water of the Marsh of Benagéber. The jurisdictional function is exclusive competition of the Court; in its administrative function this one is helped by the lawyers of all the communities, who advise on decrees, take part before the ordinary jurisdiction, present the appeals in defence of the fertile region of Valencia, etc, etc. 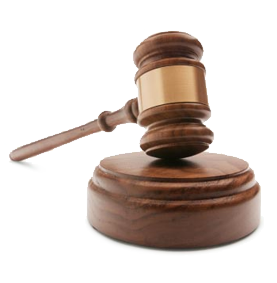