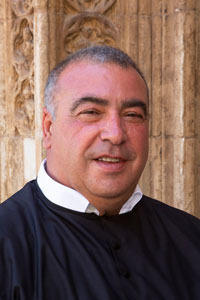 Syndic of the Acequia Favara

Favara, with 14 rows , has its origin in Quart de Poblet and water the gardens of the right bank of the river to the canal and paddy Rovella Albufera of Valencia. The Southern Solution divided their land irrigation , leaving most of them in the south of the new channel .

Its primitive weir ( Weir now takes the Repartiment waters ) , is buried in the rubble of the old channel since 1970. The ditch was approaching from Mislata parallel to its neighbor Rovella , next to the current street of Brazil, through the streets and Mayor Dr. Sempere Albors in the place of Moli de les Moles Nou , the city continues down the avenue Pérez Galdós crosses Cid avenue , where he was the roll of Patraix , and the Safranar and San Isidro neighborhood , then skirting the General Cemetery of Valencia, continues along the left bank of the new Turia . His arms of Jesus Tomasot roll , roll Rosella , arm them Monks ... are directed through the neighborhood Malilla toward nearby Avenues Ausias March, Marist Brothers and Plate , covering the area between Avenue Peris y Valero and New Turia riverbed . Arms and secondary canals in the same ditch Favara are the roll of Barca, Segarra the roll , the roll of Boira , the roll of Lloseta, the acequia del Rey and arm Pataca . Across the new channel , ditch penetrates his arms , and sequiolets sequiols to irrigate orchards Alfafar, Benetúser , Massanassa , Catarroja and Albal.

Historically, Favara ditch has been one of the larger volume of water and all of the Vega de Valencia, which is why its architectural heritage was the richest and most important (primers, mills, languages ​​... ) since its age is well documented in the Islamic period, many of these elements back to those days. His dam was at the end of Quart de Poblet, and about Mislata, now lost works by the head of the old Turia. South and Solution. It also has one of the few underground hydraulic architectures Vega, a siphon and the very end of the system to cross the ravine or Torrente Massanassa and bring the water to the terms of Catarroja and Albal. Also, its proximity to the city of Valencia which motivated many mills were installed in it, both in medieval times as in recent centuries.