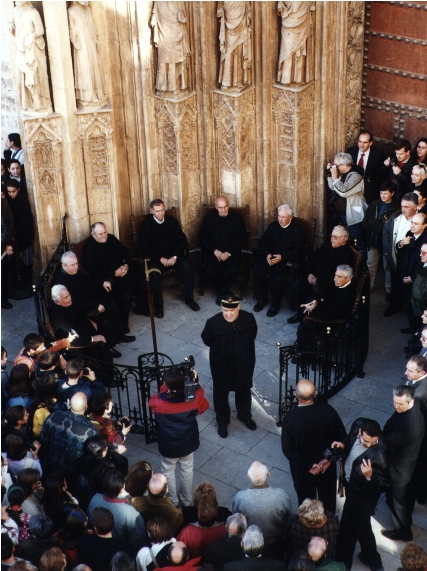 The Court of Waters has deserved the interest of multiple institutions and people from abroad. We have an example in Thomas F. Glick, University of Harvard, who came to study our institutions and product of his observations was his work “Irrigation and Society in Medieval Valencia” (Harvard University Press, 1970), of which there is an edition in Spanish language published by the publishing house Del Cenia al Segura (Valencia, 1988).

Celebrated in Washington, in 1967, a world-wide convention under the title of “ Water for Peace”, the carried out managements by the lawyer of the Court, Mr Vicente Giner Boira, take to the creation of the Asociación Internacional de Derecho de Aguas (International Association for Water Law) which, on 25th   March 1968, in solemn session, called a meeting of three undersecretaries of the Government of Spain and important figures from the USA, Argentina, Italy, Mexico, Ecuador, Holland and France in the Door of the Apostles of the Cathedral of Valencia. The following year, the United Nations gave it official recognition as a “non Governmental Consultative Organism”, being the unique organism of the United Nations created by Spaniards… 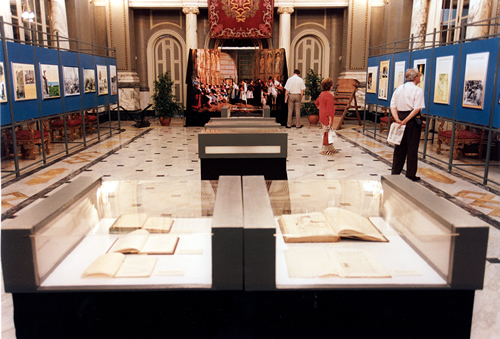 In September 1975, the International Conference on the Systems of Water Law in the World took place in Valencia, promoted by United Nations, with the attendance of two hundred representatives of 36 countries from the five continents. The adopted conclusions were fit and confirmed in 1976, in Caracas, and served as agenda or draft for the meeting that the United Nations summoned in March 1977, in the city of Mar del Plata of Argentina, to which 6,000 representatives of 138 countries attended, and in which what we could call “the Magna Carta of Water in the world” was passed.

In 1997 and 1998, the Foundation `Valencia III Milenio' of the Exc. City council of Valencia, celebrated two encounters centered on the question “the management of water in the 21st century” which, authenticated by the General Director of the UNESCO, Mr Federico Mayor Zaragoza, called a meeting of the first world-wide authorities on a subject of as much transcendence and importance as it is the management of this so appraised good for the Humanity in our city. As it could not less be, the Court of Waters of Valencia, this millenarian institution taken as a model, acquired total topicality at that time as, because of its emblematic character it is  unquestionable reference of any study carried out on water and its administration by any human group throughout history. 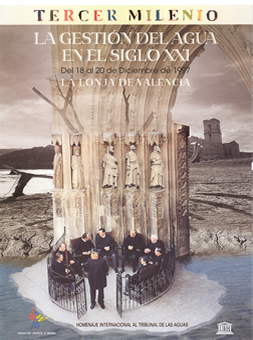 It was from 18th to 20th December 1997 when more than 30 experts met in the Lonja de Valencia, initiating a world-wide summit that would have its continuity the year after 1998. During three days the participants debated under the presidency of M.S Swaminathan, Dean of UNESCO-Costeau Ecotechnic, behind three round tables open doors and in so many others behind closed doors. In addition, the Congress served to pay tribute to the millenarian Court of Waters of Valencia as a model for the participants to outline a future international court with power to mediate in the international conflicts that water generates in the same way this institution in the fertile region of Valencia has made during so many centuries. The subjects treated in the round tables were:

The Congress, presided in its inaugural and closing session by the first autonomic and municipal authorities, the M. Honorable Sr.D. Eduardo Zaplana, President of the Generalidad Valenciana and the Ilma. Sra. Dª. Rita Nolla Barber, Mayoress of Valencia, was a success because of the representatives and level of the participants in the same. In parallel, other series of activities came to complete the days of the congress:

The General Director of the UNESCO, Federico Mayor Zaragoza, committed himself to bring the results of this encounter in Valencia to the maximum organism of this institution. In the same way, those present in the Congress solved that “Valencia is the most suitable host for the creation of an international center for the prevention and management of the conflicts of water, because its distribution is a pressing problem that causes, every day with greater force, imbalances between different  inhabitants of the Earth”. 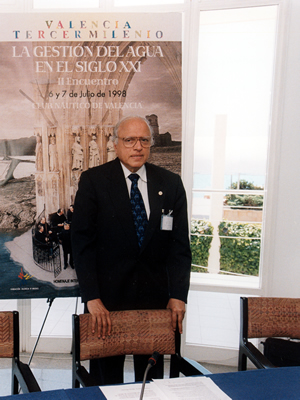 In 1998, and with the same success that the congress celebrated in December of the previous year had, Valencia hosted again a second encounter on “the management of water in the 21st century”. On 6th and 7th July, a group of experts, presided by M.S. Swaminathan, met under the auspices of the program Valencia Tercer Milenio-UNESCO, with the intention of laying the foundations for the bases of an  International  Center of Management of Water. The mission of this new Center would be the one to contribute, through investigation, to the formation, the diffusion of the information and prevention and resolution of  water conflicts in advance, as well as to the promotion of the conservation, the sustainable use and an equitable distribution of water. Among the first tasks of the center, there would be the creation of an atlas of the tactically important points from the point of view of the threats to life and the security of food because of water deficiency.

The project, authenticated by the General Director of the UNESCO, Federico Mayor Zaragoza, would lead to the configuration of an International Center for the Prevention and Management of the Conflicts of Water, with its headquarters in Valencia. Similarly to the millenarian Court of Waters of the fertile valley of Valencia,  it would call a meeting of the representatives of the States and the international organisms in order to study the problem of the great transfers, to mediate among the litigations of water distribution, helping to prevent them, constituting itself instead of high studies and formation of specialists. It would be then a unique organism in its genre, of international scope, of diplomatic and scientific assignment, mediating over the interests of the national states. 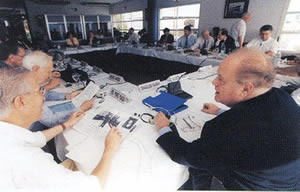 The conclusions of both congresses were sent to the Executive of the UNESCO and presented to the Commission before their General assembly in autumn 1999.